The Power of Communication in Advancing Social Justice Policy

Advocating for racial justice and equality, with a focus on criminal justice, has been a passion of Leah Abrams’ PPS’20 throughout her career at Duke, and one that she has explored in her pursuit of policy change.

In the fall of her sophomore year, Abrams began working with the Community Empowerment Fund (CEF), a local non-profit aimed at enabling and sustaining transitions out of homelessness. She would continue to work there for the rest of her time at Duke.

“Pretty early in my experience there I started working with members of the community who were facing really tangible obstacles because of a prior interaction with the criminal justice system” said Abrams.

“A charge could be from 7-10 years ago and it was still following them and preventing them from finding employment, housing, all of these repercussions that in my view were completely unfair.”

“I was able to take the things I was studying in the classroom and that I was advocating for with different organizations and make them into points of discourse that got other people talking outside of just myself and my friends,” she said.

After returning from a semester abroad her junior year, Abrams took a break from her work with the Chronicle and explored new types of writing. As an intern at the local Durham paper INDY Week, Abrams covered issues closely related to her studies and advocacy work, such as labor justice, public transportation and housing, focusing heavily on the personal narratives of those impacted by these issues.

“I grew up reading INDY Week so it was a dream come true to be able to write for them. They’re such an amazing paper because they are not shy about their viewpoint and what they’re advocating for. That allowed me to meet with people and tell their stories and not fall into some false objectivity that I think is counterproductive.” 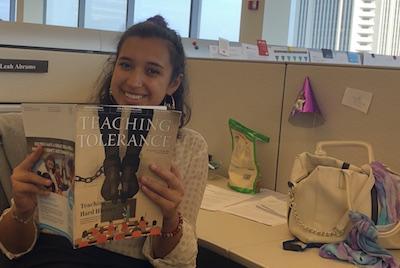 The importance of approaching change from different angles similarly fueled her as an intern at the Southern Poverty Law Center (SPLC) in Montgomery, Alabama. There, Abrams worked with Teaching Tolerance, the branch of the SPLC that works directly with educators to track hate incidents in K-12 schools and produce a magazine for teachers to assist in bringing social justice-oriented materials into the classroom. She also had a chance to expand her understanding of the differences in populations impacted by her policy advocacy.

“I lived in Montgomery and saw this whole different side of the South that even living in North Carolina I had never seen before.” Abrams said.

“I think having an attachment to all of these different places and different people gives you more proximity and more solidarity with them. You have a better understanding of the severity of the problems we’re grappling with if you expose yourself to them directly.” 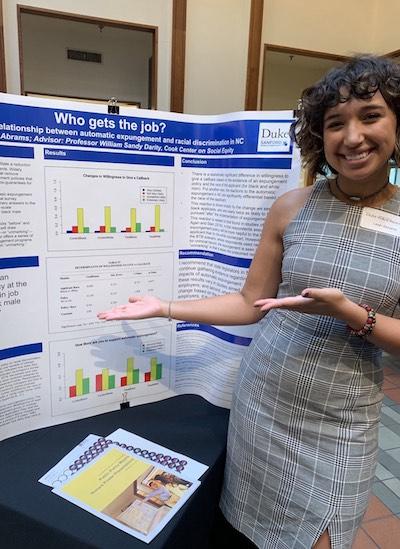 Abrams drew on all that she had learned for her senior honors thesis, “Who Gets the Job? Examining the Relationship Between Automatic Expungement and Racial Discrimination in North Carolina.” She was inspired by a study that found “ban the box” policies in New York and New Jersey, which prevent employers from inquiring about applicants’ criminal history, led to an increase in racial discrimination as employers hesitated to employ minorities assuming they were more likely to have a criminal record. With the assistance of Professor Sandy Darity, Abrams organized research to see if an automatic expungement policy would have a similar consequence.

After graduation, Abrams will continue to use her writing as a means of furthering conversations around progressive policy change at a speechwriting firm in New York called West Wing Writers.

“I think that communicating effectively around social justice and equality in the United States is the first step in making policy change. Until we have conversations about these things we’re never going to get anywhere.”