Another aspect that has distinguished the Sanford School from its peers is its commitment to exploring the human side of public policy.

From its founding as the Institute of Policy Sciences and Public Affairs, Duke’s public policy program put value conflicts front and center, making ethics a central feature of its requirements.

“All the other public policy programs put a very high emphasis on quantitative tools,” says Joel Fleishman, the founding director of the Sanford School. “We also put a high emphasis on quantitative tools. At the same time I believe strongly that the humanistic side, that is history, biography, ethics and other humanistic fields, are exceedingly indispensable in enabling people who know how to count to acquire some understanding of what it is important to count .”

A 1974 grant from the Rockefeller Foundation to support “humanistic perspectives in policy teaching and research” secured the hire of historians Bruce Kuniholm and Peter Decker along with an anthropologist, Carol Stack.

The funding allowed Bruce Payne, a political theorist devoted to the arts, to design new courses infusing fiction and biography that offered grounded views on policymaking and its consequences. When an outside evaluator took stock of Duke’s policy program in 1980, he found its “humanistic bent” a distinguishing feature. 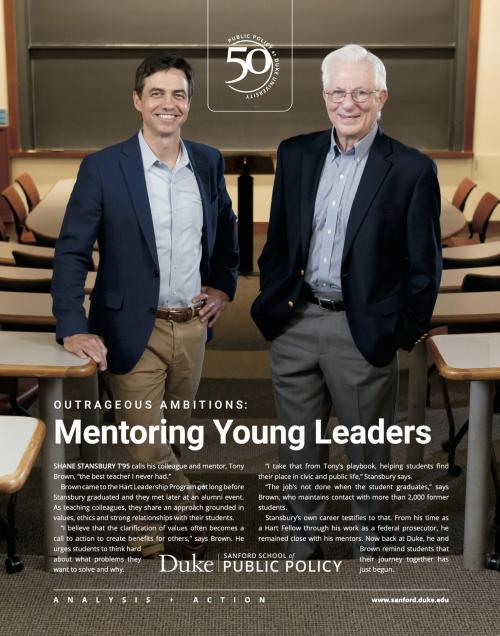 The Institute’s embrace of the humanities fostered jealousies and sometimes rancor in other quarters of the university.

The Department of English objected to a course that Bruce Payne proposed to teach with psychologist Robert Coles called “Human Consequences of Public Policy.”

“Is it possible that ‘George Eliot’ is an error for “George Elliott’?” asked a dean on behalf of the English department, referencing a contemporary writer.

He asked Payne to change the assignments to “writers who are not presently studied with some thoroughness in departments outside Public Policy Sciences.”

Payne went ahead with the course, after Fleishman made sure the letter circulated for a laugh around campus.

Fleishman also had to fend off uninformed critisism of a course taught by Kuniholm on the “Palestinian Problem and U.S. Policy.”

In 1986, Payne launched the Hart Leadership Program (HLP) for Sanford undergraduates, thanks to a donation from Milledge A. Hart III and his family. Ever since, HLP has been at the forefront of reinventing leadership pedagogy.

It has remained a center of humanities-oriented teaching under subsequent direction from Robert Korstad, Alma Blount, and now Gunther Peck . The addition of Korstad and Peck, and subsequently Hal Brands (who later left for a distinguished chair at SAIS), brought the number of historians at Sanford at the time to four–at the time an unprecedented number for a public policy program.

Sanford also continued to incorporate the arts and public policy. The Institute nurtured the career of Alex Harris, a photographer in the mold of Walker Evans whom Fleishman had encouraged to come to North Carolina. During the 1970s, he taught courses in between work with Robert Coles.

The Institute submitted a grant, funded by the Lyndhurst Foundation, that established a program in documentary photography and public policy, which Harris eventually grew into what is now the Center for Documentary Studies.

Photography and documentary film offered ways to imagine lives beyond the statistics. Indeed, the Sanford School regards the quantitative courses of the curriculum as indispensable – but it also values seeing people and their lives at the root of policymaking.

“I think my struggle with students,” says Harris, “was not so much to have them think about pictures in terms of policy, but to have them go into a situation in an open minded way, and see what their pictures told them. Don’t simply find what you’re looking for.”

To be sure, the Sanford School never eschewed but instead celebrated the core quantitative aspects of public policy. Applied economists, ethnographers, and normative theorists had uneasy tensions at times, however, over the shape of the curriculum and hiring priorities. But together they made the School greater than the sum of its parts.