The Tyranny of Merit: What's Become of the Common Good? 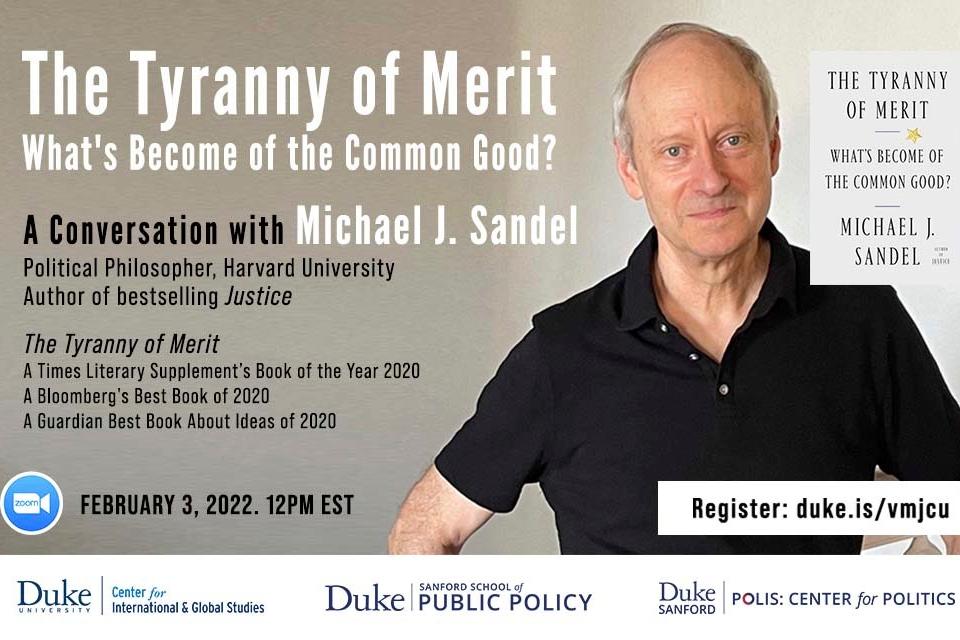 Please join Harvard Professor Michael J. Sandel for a conversation with Duke faculty on his award-winning book The Tyranny of Merit: What's Become of the Common Good? Professor Sandel will be joined in conversation with Judith Kelley, Dean and Terry Sanford Professor of Public Policy and Political Science, Duke Sanford School of Public Policy, Michele Longino, Professor Emerita of Romance Studies, Malachi H. Hacohen, Bass Fellow and Professor of History, Political Science and Religion, and Gopal Sreenivasan, Crown University Distinguished Professor in Ethics. The event will be moderated by Giovanni Zanalda, Director of the Duke Center for International and Global Studies. In The Tyranny of Merit, Sandel argues that to overcome the crises that are upending our world, we must rethink the attitudes toward success and failure that have accompanied globalization and rising inequality. Sandel shows the hubris a meritocracy generates among the winners and the harsh judgement it imposes on those left behind, and traces the dire consequences across a wide swath of American life. He offers an alternative way of thinking about success--more attentive to the role of luck in human affairs, more conducive to an ethic of humility and solidarity, and more affirming of the dignity of work. The Tyranny of Merit was listed among the best books of 2020 by Bloomberg, The Guardian, The New Statesman, The Times Literary Supplement, Le Point (Paris), and New Weekly (Beijing), and was influential in the recent German election, where Social Democratic candidate Olaf Scholz (now Chancellor) drew upon its themes. Michael Sandel teaches political philosophy at Harvard University where he is the Anne T. and Robert M. Bass Professor of Government. His writings-on justice, ethics, democracy, and markets-have been translated into over 30 languages. He has been described as "the world's most influential living philosopher." (New Statesman). His legendary course "Justice" was the first Harvard course to be made freely available online and has been viewed by tens of millions of people, including in China, where he was named "the most influential foreign figure of the year." (China Newsweek). This event is organized by the Duke University Center for International and Global Studies and co-sponsored by the Sanford School of Public Policy, Religion and Public Life @ the Kenan Institute for Ethics, and POLIS: Center for Politics at Duke University.