His first day as a Duke Fellow, COL Wes MacMullen took a seat in a Sanford School classroom, and after a few moments of silence had a nervous thought.

“I suddenly realized that probably half of the students there thought I was the teacher,” said MacMullen, a fellow in the Sanford School’s Counterterrorism and Public Policy Fellowship Program.

He wasn’t, but if you drop a veteran officer with more than two decades of military experience into a classroom of civilian undergraduates and graduate students, you’re going to get some surprises. For the past five years, the fellowship program has been a year-long academic home for FBI, Army and Navy officers. The results have overturned expectations of fellows, faculty and student alike and benefited both the military and Duke.

Directed by Visiting Associate Professor of the Practice Tim Nichols, the program includes four Army officers and one Navy officer this year. They take core courses on national security decision-making and strategic intelligence taught by Nichols and conduct a year-long research project, but they are otherwise free to set their curriculum.  Most focus on public policy courses or Fuqua School leadership classes, but Nichols said some branch out into the humanities, engineering, and other areas at Duke.

Selected by the military, the officers come to Duke with master’s degrees. Nichols said several graduates have already become generals, and he said he thinks the time at Duke has helped their career path. These officers could have gone to a military war college to get specialized training, but Nichols said “they know Duke offers them something different.”

“When David Schanzer and I organized this program, we wanted a program that stripped the officers of the preconceptions they built up through a career of military service,” Nichols said. “We put them among the students and expose them to different views and perspectives than they would get at a war college.

“They come here thinking their experiences have provided them a lot of answers. By the end of the year, they leave feeling like they have no answers.  But they have sharpened their critical thinking skills, they know more about relevant issues, and they know what questions to ask. I think it’s helped them succeed at the highest levels.”

This semester, Nichols teaches the fellows in a 500-level (upper level undergraduate and graduate) course on intelligence failures. As part of the class, the fellows are working in small groups with students doing a post-mortem on a specific U.S. intelligence crisis, such as the attack on Pearl Harbor or India’s unexpected nuclear bomb detonation in 1998.

After a recent class discussion, the fellows discussed why they chose to come to Duke. They said they dove into the student experience with enthusiasm, spending long hours in the library, going on class field trips, talking with students about spring break and rooting at Duke basketball games.

“The idea of sending military officers to a university is one way the military can prevent group think,” said Army aviator COL Chris Black. “If all officers are going to the same war college, you’re going to get group think. Bringing officers to Duke ensures we get a wider view of potential questions and answers that go outside the military spectrum of thinking.”

But Black and the other fellows said they hope the value of the program goes both ways: They want to help influence the undergraduates they work with.

“I enjoy interacting with public policy students,” Black said. “They’re going to have careers in government agencies, some in nonprofits, and they’re going to be making important decisions.  They are very bright and they know a lot of theory, but I hope my experience can offer them some practical advice, show them how the problems they will run into might present challenges to their theoretical learning.”

“It’s humbling to be in an academic environment, see different points of view and understand different priorities and value sets,” MacMullen said. “It’s worth taking these back into the military. When I get back, I won’t be dropping the Duke name everywhere, but I will be saying here’s a different way of looking at this.”

The fellows bring their experiences into the classroom discussions. MacMullen has discussed his experiences in Iraq and Afghanistan. Army aviation LTC Matthew Weinshel served in Bosnia and Kosovo, one of the subjects discussed in the fall course he took, “The Politics of National Security.”

Duke students say they’re open to hearing these stories. Junior Kayla Schulz, who has taken two courses with fellows, said hearing their experiences “brought another level to our education. They dispel some myths.”

But Schulz said she was just as interested to hear about their non-military experiences. “These are people with families, they’re living real lives, and just talking about what they did over spring break is different from the normal student conversations I’ll have.” 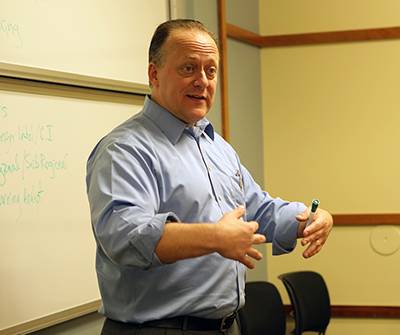 Nichols said it’s not coincidental that the fellows program was launched at a time of increasing concern about a growing military-civilian divide, something the fellows said was also on their mind.

“This is one of the reasons the military supports these programs at universities,” Weinshel said. “There are myths on both sides. Military folks have some expectations about how civil policy makers would react in a situation, and the same is true on the other side.  This helps bridge that gap.”

Nichols recalled a class several years ago when a fellow gave a presentation on a policy issue.  As the fellow spoke, the Duke undergraduate student sitting next to him started shaking his head.  At the end Nichols asked the student his thoughts.

“This was a brilliant student who was being sought by different public policy graduate programs. And he just took apart the fellow’s argument piece by piece.  And afterwards the fellow came to me and said, ‘He was right!’”

But there are other stories where the fellows have corrected students, Nichols said. The value of the program is that interaction benefits both.

“Military officers just don’t get much opportunity to participate in civilian life,” Nichols said. “They sometimes hear things from back home that can be depressing to someone who is putting their lives at risk.

“But they come here and interact with these students and they find bright young people who are engaged with issues important to this country. To a person they gain some confidence about the future of this country. They return to service feeling very reassured.”