Election season provides a deluge of information: from the debates to major policy speeches to political ads. It can be difficult to parse what’s true, what’s not and what’s a straight-up lie.

However, several new projects led by the Reporters’ Lab, a program of the Duke Sanford School’s DeWitt Wallace Center for Media & Democracy, are developing ways to improve that experience.

During the third presidential debate in Las Vegas on Oct.19, the group tested a Google Chrome extension that caused live fact-checks to pop up on user’s screens as the candidates were talking.

The experience allowed debate-viewers to see ratings of Hillary Clinton and Donald Trump’s statements in near real-time as a Politifact editor tweeted them.

“It was marvelous and it worked better than we dreamed,” said Bill Adair, Knight Professor of the Practice of Journalism and Public Policy

Adair was the founder of Politifact, an influential and award-winning fact-checking organization operated by the Tampa Bay Times. He still serves as a contributing editor, and now runs the Duke Reporters’ Lab.

More than 380 people used the extension during the debate, which was designed by Duke computer science senior Gautam Hathi. Reporters’ Lab students monitored the program and gave feedback on how to improve it. 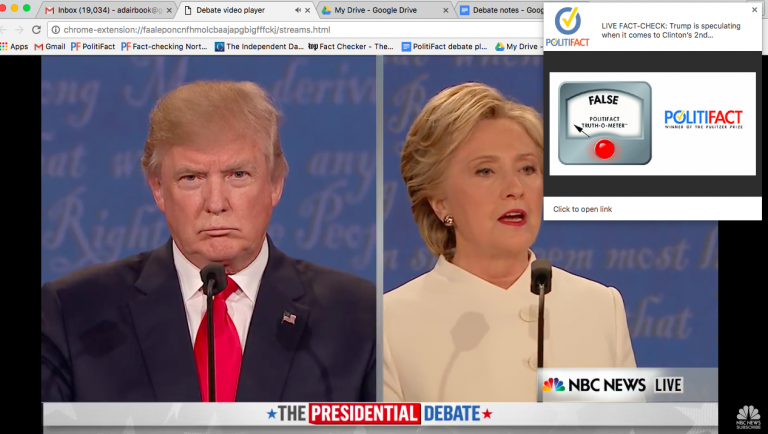 The Reporters’ Lab also launched a Fact Checking app for the Amazon Echo—a voice-controlled virtual assistant—which allows users to literally “ask the fact-checkers” whenever they are curious about a claim’s veracity.

That roll-out will be more challenging, Adair noted, as the Echo cannot always interpret correctly exactly what is being asked.

Still, Mark Stencel, co-director of the Reporters' Lab and visiting faculty at Sanford, noted that the project, and others like it, represent a new frontier in getting journalists to collaborate.

“That we can get them to work together with us and with our technology partners means it’s easier to create tools that will help fact-checkers do their work faster and get their journalism more directly to the readers, listeners and viewers their reporting is meant to serve,” he said.

The goal of both projects is to get fact-checks to the public “instantly” to help add accountability to claims in political media.

“A lot of the work we do here is trying to figure out ways to get to that point,” Adair said.

And that point may not be so far off in the future. The Reporters’ lab is seeking to increase its collaborations with computer scientists at Duke to automate the fact-checking process.

“I used to think that day was a long way away,” he said. “I’m convinced we’re closer than ever to being able to do that.”